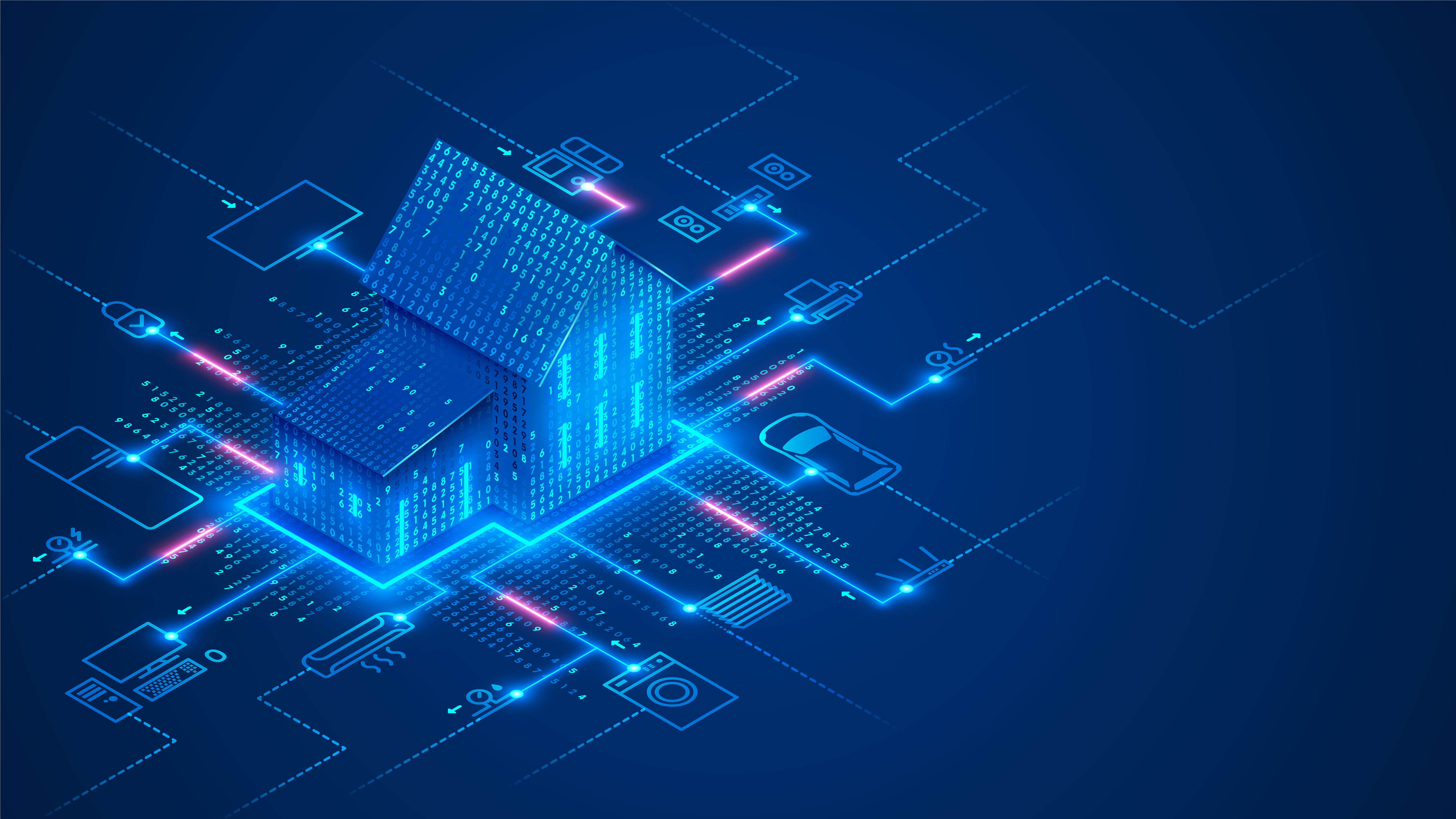 Smart home is a term we have heard more and more frequently in the last few years. Increasing pervasiveness of Internet-capable devices, energy saving and green economy requirements, together with a higher attention toward smart and automated services, they are all paving the road for smart-home to be the near future of housing.

Mainly due to the fast evolution of devices and technologies the smart home term is often abused – as people tend to confuse “smart home” with “home automation”- which is an older and loosely related concept.  At the same time, simply having a Smart TV in the house, is not sufficient to consider the house a full-fledged smart home. Thus, what does “smart home” actually mean?

Strongly related to the Internet of Things (IoT), a much wider paradigm of which Smart-Home constitutes an implementation, Smart Homes are houses equipped with Internet connected and possibly autonomous devices that cooperate in order to provide smart and easily configurable services to the house-holds.  The first recent big step toward the popularity of smart homes has been the introduction of “Home Assistants”.

What had integrated them in our homes is the recent distribution of a set of physical devices: the smart speakers. As the name suggests, these devices are (mono) speakers that integrate one or more voice assistant software. They are voice activated, listening and waiting for “hot words” that constitute the beginning of every command. The capability of answering correctly to a command given in a colloquial way, extrapolating the meaning of what we are saying also from non-standardized sentences is removing the diffidence barrier of many users, who were using Siri and Google Assistant only to call someone without typing, generally while driving.

Though there are independent producers too, Google, Amazon and Apple have produced and sold s branded smart speakers in great number at an affordable price, and they are now popular in many of our houses. The affordable price is most likely one of the main aspects that brought smart speakers such as Amazon Echo, Google Nest and Google Home on the kitchen counter of many houses. We feel more and more comfortable asking for a timer for the boiling water (yes, vital in Italy), some lighthearted music (without spending time selecting it), or the weather forecast for the next hours (for not taking the burden of taking a look outside the windows).

Smart speakers plus the voice assistant make thus a real home assistant, with or without integration with the always increasing number of smart actuators for smart homes. Smart light bulbs, smart thermostats, and thermal valves, remotely controlled plugs, and even vacuum robots can now be integrated with the home assistants so that the user can use her voice to switch on/off the light in another room of the house, manage the temperature and even cleaning the floor, literally without moving a finger.

What is Actually Smart?

Reading these words, we already feel like we’re in the house of the future. Knowing that we can now implement this “house of the future” with a relatively low cost, should make us feel that we can all have a real smart home. Still, we are not there yet! The current vision, the current generation of what we call smart home is basically an improved version of a set of remote controlled house appliances: improved by the fact that we can control these devices with our voice and by the friendliness of this voice interface, ad hoc integrated by device producers for a better marketing.

Still, would you really consider an entity that simply follows issued commands “smart”? It would not be much different from considering a TV remote “smart” since it switched on the TV on Channel 1 after you pressed the button 1 on it. Yes, giving voice commands to switch on lights is cool and looks a lot like sci-fi, even if voice command technology alone stretches decades into the past (Siri itself dates back to 2010).

However, what it actually takes for a technology to be considered smart is the ability to infer things and/or provide services without needing an explicit request from the user. Keeping it practical; it is not “smart” if the bedroom light switches on after I ask my home assistant to do so. What is smart is the bedroom light switching off automatically after noticing (somehow) that nobody currently needs that light.

The ability to anticipate the user requests or needed services is what shifts the paradigm from “home automation” to “smart home”. An effective smart home is thus made by a set of smart devices that are interconnected, one with the other, either directly or by using the home assistant as a communication hub. The ability of the devices to communicate autonomously is, in fact, a key factor to provide real smart services: staying on the example of the smart bedroom light, a presence/movement sensor or a camera could be used to infer if the light is needed on or off in the room. Now, that would not be the primary role of the sensor or camera (which will likely be part of an intrusion detection system, instead), still it is capable of providing a useful information on the behaviour of the light, such as: “no one is using the room now, you can switch off” or, even better: “they fell asleep, please do the same”. This is the kind of interaction that is expected to happen in a fully-fledged smart home and, in order to make it smart, it should have exactly this semantic. “No movement has been recorded in 10 minutes by the light motion sensor, switch off the light” would mean taking a step back toward standard home automation.

Let’s now take from these considerations the constituting elements of a smart home: (i) smart devices that are able to communicate autonomously; (ii) ability to infer and anticipate the user need; (iii) repurposing of devices for providing smarter services.

Looking at (i), communication experts might easily reconnect to the Machine to Machine (M2M) communication paradigm defined by ETSI, which is based on direct autonomous communications among devices, without any user participation. However, the smart home must be user centric, hence autonomous communication among devices has to be paired with user interaction. This interaction takes place in both ways: commands issued by the user (luckily not the other way around) and feedback provided by the smart devices. A home assistant is vital here since it can provide feedback by directly talking to the user. Friendly and accessible configuration interfaces accessible through a smartphone/tablet or a PC are also vital components to show to the user that she is in control.

To achieve (ii) and (iii) two other elements are important: a data-centric approach and integration of third-party software. More specifically, differently from home automation, the smart home is data centric. In fact, recalling again the smart light example, the presence of a sleeping person in the room is by itself a piece of data. This piece of data can be used by the smart light to define its behaviour, but can also be exploited by the alarm system to lock external door and activate to detect intrusions, or it can tell the heating system to activate the night mode, etc. This information piece together with the history of issued commands and data recorded by other sensors all contribute to the definition of a data core which subtly contains user preferences and habits.

The New Generation Smart Home is Just Around the Corner

Extracting, or even better, inferring this useful information from the pool of loosely organized data pieces is the task of continuously smarter data analysis algorithms that are being tailored for the smart home environment. It is because of them that we have the feeling that our home assistant is always able to know the song we want to listen. Making devices and software able to exploit the inferred information to provide useful desired services in a smart home is the challenge that the new generation of smart home product makers have to face. In particular, the devices need to be highly configurable, with the possibility of on-the-fly software/firmware updates and the possibility to install or interact with software provided by third-party developers. Thus, new services and functionalities can be installed in a smart home, without necessarily requiring new hardware or devices.

This model which is characterized by being data-centric and where services come as plugins or apps, made available through a marketplace, is not as far as it might seem. It is not yet as popular as the smart speaker-based smart homes, still it is a reality indeed. Platforms based on IFTTT, Web of Things, Home Assistant, and other similar projects already exist and implement the new generation smart home for early adopters and IoT makers. Concerns related to privacy, safety, and user friendliness might still be a barrier to overcome, but the road is paved. The first company or consortium able to provide a solution based on this smart home model, who considers and tackles these adoption barriers effectively, will likely determine how the new generation smart homes will look like in the near future.

Andrea Saracino (Ph.D 2015) is a researcher in Computer Security at IIT-CNR (Pisa, Italy). He is passionate about cybersecurity management and enforcement in challenging, distributed and dynamic environments, including mobile and constrained devices, with a focus on human factors and AI applications in analyzed systems. He is the project coordinator of SIFIS-Home.